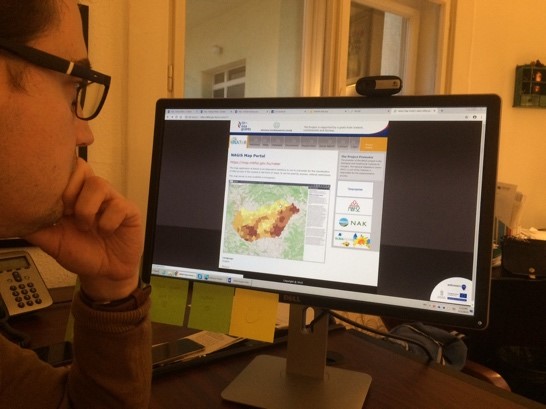 The National Adaptation Geo-Information System (NAGiS) was launched in 2016 after three years of intensive cooperation among several units at different levels and sectors in the Hungarian public administration as well as foreign actors (the EEA Fund and the Norwegian Directorate for Civil Protection and Emergency Planning).

Observed changes in climate conditions and the political processes triggered by these changes have led to demands for local, regional and national adaptation strategies. The fulfillment of UN Sustainable Development Goals also requires strategies at different territorial levels. In Hungary, the data and evidence needed to develop strategies have been fragmented across different institutions or not been available at all. NAGiS was conceived as a way to use new technologies to overcome old barriers by the exchange of information and knowledge. It was specifically developed to assist policy-making and strategy-building processes in climate change adaptation and related fields. NAGiS was developed between 2013 and 2016, when the tool was launched, and has been expanded since then by continuing to add more data to the tool.

Geographic Information Services (GiS) are functional software applications that provide information generated from geographically pinpointed data. There are different types of GiS applications; for instance ISO19119 categorizes them according to six functions. NAGiS mainly falls into the category of “Geographic human interaction services—presentation of information”, but has potential to be classified also as a “geographic communication services” and “geographic processing services”. NAGiS features different applications and services, some openly accessible and others accessible after authorization. Openly accessible features and content include: articles, scientific papers, short reports (directly accessible in HTML format); downloadable documents (in PDF format); e-services such as browser-based map application; browser-based NAGiS Metadata explorer; Web Map Service for Desktop GIS environments; interactive inquiry and visualization. The NAGiS portal is based on an open source Content Management platform, Drupal, which is one of the most popular Web Content Management Systems (WCMS / CMS), providing flexibility to develop and adapt the platform for the individual needs of the system administrators. NAGiS is not only a GIS tool. It goes beyond information provision by its capacity to carry out assessments (i.e. it has analytical capacity) and provides results as input for the development of different policy documents, especially climate change strategies.

The development of NAGiS has led to improvement in the intensity and quality of collaboration among involved organizational units in public administration. It has contributed to a climate of trust that facilitated collaboration. Especially openness towards sharing data has increased, despite this not being part of natural practice in Hungarian public administration. Key stakeholders such as local governments were included in several stages of the development. The benefits arising from these arrangements may have long-term positive effects on output, in turn impacting overall legitimacy of the system, although the effect is likely negligible in comparison with ICT tools that target citizens directly.

More than 500 licenses for using NAGiS have been granted. Two user surveys have been carried out by Hungarian partners and users in the project, according to which the general attitude towards the tool is positive but there is room for improvement. The research carried out by the TROPICO team confirms that NAGiS supports policy development at different levels of governance. Since its launch NAGiS has served to provide spatially relevant transdisciplinary evidence primarily for climate policy development. However, since climate change is a horizontal issue that cuts across sectors, NAGiS has the potential to provide input for other policy areas as well, in particular territorial development, energy and social policies. By itself, however, the introduction of one ICT tool cannot completely transform public administration practices. Thus, the overall effect of NAGiS is low in terms of achieving more significant changes in policy-making.

NAGiS did not have any significant impact on politico-administrative power relations. Climate change has relatively low salience in Hungarian politics, and the development of the tool was made possible by the active endorsement of lower-level bureaucrats within the Ministry of Development in combination with benign neglect from high-level politically elected officials.