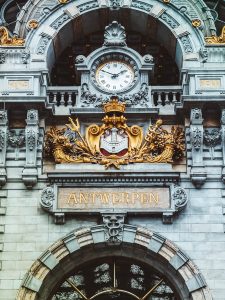 With its Smart City policy, the city of Antwerp put forward the ambition to join the top tier of European Smart Cities. A vision document was adopted by the City Council in 2017, delineating the following five priorities: smart governance, smart mobility, smart energy and materials, smart security and smart citizens. Prior to this vision document, in 2016, the City of Antwerp had agreed to a covenant with the world-renowned research centre IMEC. The goal of this covenant was to install an innovative ecosystem for digital and innovative entrepreneurship in which city departments, private businesses and research organisations could test smart technologies and applications in real-life urban contexts. IMEC and the city of Antwerp contributed equally to the covenant budget. These two formal agreements laid the groundwork for an integrated strategy for Smart City projects in and with the city of Antwerp.

Three core actors comprised the key partners of the Smart City policy. First, the city departments of ‘Strategy and Coordination’ and of ‘Innovation and Business’ represented the city’s administration in strategic decision-making. Second, IMEC contributed to the covenant budget and was therefore included as a core actor. Both the city and IMEC appointed a coordinator for their activities regarding Antwerp’s Smart City policy. The final core actor was Digipolis, a public body that provides IT-support for the city’s entire administration. The actual Smart City projects were generated ‘bottom-up’ by consulting the needs of city departments, citizens and local businesses. Thus, various city departments were also involved in the projects and in operational decision-making, and they were encouraged to propose innovative projects that could be tested in the city.

After an evaluation of the covenant in 2018, an addendum was added to the initial agreement which moved the focus of Smart City projects to a physically delineated ‘smart zone’ where sensors and other applications would be installed to experiment and test smart technologies. Though the eventual outcomes of the projects were not in line with the lofty ambitions that were initially put forward in the covenant and the vision document, the involved actors still consider the process to have been successful and expressed interest in a continuation of the collaboration. Prior to the collaboration, the highly technological content of the projects was still a quite unknown territory for the city departments, and their experiences have made them better prepared to implement similar technologies and projects in the future.

The technologies and applications used in the Smart City projects were quite advanced, and the city departments did not have much experience or knowledge connected to them. Conversely, the coordinators did not have the knowledge of local practice that city departments had honed through their years of experience in public service delivery. These knowledge gaps needed to be addressed in order to effectively implement the technologies and test their use in real-life urban contexts.

Additionally, city departments and the coordinators did not have the same expectations of the Smart City strategy. The initial strategy was primarily developed with the perspective of an innovative city where technological start-ups and entrepreneurs could develop technologies. The city departments were looking to improve city life for the citizens from the perspective of their particular field of expertise. Finding the balance between innovativeness and implementability was therefore a crucial factor. While some projects were considered too ‘state-of-the-art’ by the city departments (meaning: difficult to implement on a larger scale so they would benefit more citizens), they were not ‘state-of-the-art’ enough from the perspective of the coordinators (meaning: not transformative enough to advance their research and to draw the visibility they would have liked).

Lastly, the organisational cultures of the city departments, IMEC and Digipolis were different. IMEC is a research centre that is used to experimenting and innovating high-level technologies. Digipolis is a small and agile organisation that can adapt quickly to new technologies and new working methods. The city’s administration, on the other hand, was reluctant to spend human and financial resources – both already scarce – on experiments that might not lead anywhere.

The collaboration was initiated with high ambitions and the initial covenant was therefore set up from a rather innovative perspective. For city departments, the collaboration was a bit out of balance, and they did not have the necessary knowledge and experience to thoroughly participate in the initial idea generation phase. This put much of the influence on decision-making in this idea generation phase in the hands of the technologically experienced partners Digipolis and IMEC.

The balance of influence in the collaborative process had to be readjusted in order to effectively implement Smart City initiatives, as city departments were indispensable because of their knowledge and experience of local practice. To do this, the coordinators of the project put forward a collaborative leadership style, focusing on group dynamics and encouraging the active participation of all partners. Through this approach, city departments experienced a learning experience that allowed them to participate more actively moving forward.

Another important intervention to balance out the collaborative process was the introduction of a formal governance structure with an addendum to the covenant. The governance structure developed a collaborative arena for each project where all the relevant actors were represented. This further improved communication between the partners through the use of mutual frames of reference.

A lesson learned in implementing Smart City projects is to be aware from the beginning of the different perspectives, experience and knowledge that each collaborative partner brings into the collaboration. Furthermore, it is important to leave ample room for learning and to make sure partners can actively participate.