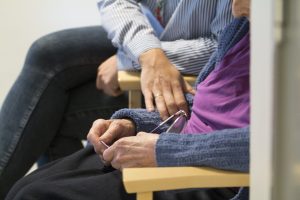 The project ‘Burenondersteuning’[1] was a collaboration between different cities and private partners from late 2018 until early 2020 to develop a system that connects neighbours to help each other with small tasks and to remedy loneliness. The project had several objectives. First, the project wanted to tackle loneliness among citizens by providing a network of neighbours with whom citizens could interact. Second, the network of neighbours would also provide assistance in carrying out small tasks (e.g. taking out the garbage, helping in the garden, etc.). Third, the detection of the availability of neighbours would be implemented through Internet of Things (IoT) technologies. Through sensors that were connected to the internet, the network would be able to detect when someone had some free time, without that person needing to indicate that he was available. The project was financed with a grant from the Flemish government (Agency for Innovation and Entrepreneurship, Vlaio), ‘City of Things’, that covered 80% of the expenses of the project. 20% of the expenses was financed by the municipalities themselves. The city of Aalst, the city of Dendermonde and the inter-municipal collaboration in the region ‘MidWest’ (DVV Midwest) were selected by Vlaio to implement their project with the grant. They had one year to do this.

Ideas were generated in different phases of the innovation process. Before the procurement phase, the partners in the steering committee had already generated some ideas about how to connect neighbours and how IoT could play a role in this. After the procurement phase, Give a Day and MonkeyShot (two private companies) became part of the partnership. This provided the partnership with new insights into what was possible with several existing technologies (e.g. the matching platform of Give a Day). In the later stages, users became involved through interviews, focus groups and co-creation sessions. This ultimately led to the adoption of a whole new concept (Neighbourhood bell), and the abandonment of the original one (IOT). Interactions between the various partners therefore had a profound effect on the end result of the project.

There were different kinds of users involved in different phases of the process. The most important involved users were elderly people, who were already affiliated with other participation projects of the city. There were for example some users who were involved because of their function as representative of a neighbourhood committee. Other users were identified through the ‘coffee bus’ initiative of the city of Aalst, with which short information rounds about the project were given in various areas of the city. Another group of involved users were the health care providers. This group of users were able to give information about the needs of certain elderly people and on how a matching tool might assist them in these needs.

Two variables are especially important to understand this case, namely network management and user involvement. The impact of these two variables on the result of the project was quite extensive. Network management (e.g. communication, discussion, contact) solved multiple tensions between the partners, but the sources of these conflicts reveal a broad set of variables that might also play a role in similar collaboration projects. These variables are: hierarchical position (Aalst as procurer vs. Give a Day as contractor), accountability (citizens of Aalst vs. market), organisational objectives (general service delivery vs. niche service delivery), strategic opportunities/motives (realizing innovation in own city vs. scaling-up/commercializing innovation), and organisational cultures (bureaucracy vs. start-up).

The impact of user involvement on the end result of the project is not easy to overstate. The users completely redirected the focus of the project from an IoT enhanced innovation to an innovation with phone technologies. This even led to discussions between Vlaio and Aalst, because IoT technologies were part of the grant agreement Aalst had with Vlaio. Because even Vlaio could not ignore the wishes of the users, the partners were eventually allowed to proceed in the project. The frequency and depth of user involvement pushed the project into a different direction, but also allowed the partners to make a strong case for their innovation. If users had not be involved this thorough throughout multiple phases in the project, chances are that Vlaio would have not been convinced about the change of direction and the partners would have been obliged to make an IoT innovation (which probably would never have been used by the target group). Furthermore, by suggesting the phone as communication channel for non-digital users, the users opened up a new avenue for innovation, which was blocked by the sole focus on IoT technologies. Give a Day and MonkeyShot were triggered by this change in focus to start looking for ways to connect the platform with phone technology and eventually came up with the “Neighbourhood bell”. In other words, it seems as if the user involvement in this project triggered creative processes of learning, idea generation and exploration, which would not have been there without the involvement of the users.

What makes this case also an example of good user involvement is the way in which the partners dealt with the contributions of the users. It would have been far easier for the partners to ignore the wishes of the users to develop an innovation with phone technology rather than with IoT. Their chances of obtaining additional grant money to implement the IoT innovation in Aalst would also have increased. Instead, the partners listened to what the users had to say and developed something that was not completely in line with the grant agreement. This is testimony of the willingness of the partners to develop something for the users, and not to strengthen their own position.