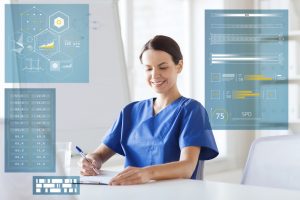 The CoNurse project was initiated in 2017 and the solution was implemented in 2018. The objective of the project was to reduce human-resulted errors in carrying out standard nursing procedures. Cognuse detected a need for it in Estonian health care through interactions with the North Estonia Medical Centre (henceforth NEMC), as there was a lack of necessary tools for supporting health care professionals. Cognuse is a private company building ICT solutions for healthcare professionals and patients. They focus on improving the guidelines adherence to improve care quality and to reduce complications from avoidable human errors. They have carried out various projects with regards to health and welfare, like a platform connecting service providers and elderly in need care, a website for interactive practices for speech impairments and other innovative solutions.

The various problems with nursing procedures guidelines have been well-known within the health care sector for decades. NEMC itself experienced a clinical error in the blood transfusion procedure, which resulted in a fatality. This made the health care provider turn attention towards supporting instruments for health care specialists. This allowed the initial project to expand into an additional standalone development that specifically addressed blood transfusions. Cognuse and NEMC jointly highlighted the possibility of the CoNurse solution within the Estonian health care system. This resulted in their joint collaboration to introduce an app with a voice command function for supporting health care professionals in conducting the blood transfusion procedures. It offered the health care providers a legitimate tool that could be used as evidence in legal proceedings. Health care providers were enabled an additional evaluation tool for measuring the resource costs of procedures, which the app enabled. In addition, the tool could play a role as an educational and assistance tool during transitions in nursing procedures. The project resulted in a voice guided and commanded app that included several digitalised nursing procedure guidelines, which were piloted in the four largest medical centres in Estonia.

The innovation comprises of an app, initially made for IOS, but later for Android as well, that provides voice commands to guide nurses through nursing procedures. Nurses can engage any digitally prescribed nursing protocol and carry it through based on a selected number of voice commands. The solution enables the nurses to additionally read through the guidelines on the app, if their preferred way of processing information is through visual communication rather than through audio. It provides nurses a key overview of the protocols to carry out. The solution has currently English voice support, but also has had Estonian language support. Nurses receive the voice commands through Bluetooth headphones, which enables them to carry out protocols without the need of a phone.

The core ideas were already strongly established during the start of the project. The engagement process started with brainstorming sessions that initiated the project. Most of the core ideas were set during these brainstorming sessions, where Cognuse and NEMC interacted with each other to determine the existing problems in healthcare and the best possible technical solution applicable to this problem. Cognuse based the app on the combination of the best existing technical solutions on the market and complementing them with additional functionalities. More widespread engagement occurred during the piloting phase and the changes during it were related to nursing procedure guidelines with a limited amount of technical changes. Interactions with partners did provide certain key advancements for the app, as feedback from health care providers during testing led to the implementation of the Estonian supported voice commands and the visual representation of the guidelines on the app. The testing in real-life conditions provided detailed examples on how interactions with the device took place and how the health care professional could incorporate it into usage. However, Cognuse did not always notify beforehand about the updates, which resulted at times in unexpected changes for health care providers.

The largest health care providers (NEMC, Tartu University Hospital, West Tallinn Central Hospital, East-Tallinn Central Hospital) in Estonia were involved in the project. The reasoning for Cognuse to engage the largest health care providers was the opportunity to engage actors who have the largest number of possible procedures available, enabling the solution to be tested in as diverse conditions as possible. NEMC was included already during the problem formulation to determine the problems and the needs of the health care sector and were involved in constructing the initial vision for the project. Engagement was additionally reliant on pre-existing contacts within the health care sector.

Cognuse designed the constellation of the partnership to maximize their options during the process of implementation, but this provided marginal input for the innovation itself, as Cognuse engaged the relevant actors after the core idea was set, which affected the acceptance of their ideas and the novelty of their approach. The consideration for it was based on a compromise between technical feasibility, usability and costs, which Cognuse had to balance.

The importance of individuals is crucial within the Estonian context and this has affected the CoNurse project. The relationship between the CEO of Cognuse and the representative from the Ministry of Social Affairs has proved to be key in directing the progress of the CoNurse project. The power distributed to an individual within the Estonian administrative structure provides them considerable power in making decisions, as they tend to possess the sole competency within the field. As a result, relations between individuals become more important, as individuals possess considerably more power. This has been the case for the CoNurse project and has resulted in difficulties during the collaborative process.

The CoNurse project expanded at a very rapid rate between different health care providers in Estonia, which did create setbacks for the project, as they attempted to create a solution that would engender widespread acceptance. However, the coordinating actor, Cognuse, faced a disparity of ideas due to limited interactions between users, which led to uncertainty regarding the direction to take with CoNurse. However, Cognuse managed to establish and maintain positive interaction cycles throughout the collaboration that resulted in the willingness of the user organisations to engage in further innovative initiatives beyond the CoNurse project.