This case study is about the implementation of an evidence-based practice (EBP) architecture where guidelines and information can be shared and where applications can be connected for the network members to use. The Belgian EBP is oriented towards the development, validation, dissemination and evaluation of medical guidelines for health practitioners. This entails ten health care professions: GPs, nurses, occupational therapists, dentists, dieticians, pharmacists, physiotherapists, speech therapists, midwifes and podiatrists. These medical guidelines ensure health practitioners that they advise patients in an evidence-based manner.

Because of the long lifespan of the EBP partnership(s) (almost two decades and still operating), we consider a couple of EBP innovations in this case description, namely the CDLH (Cebam Digital Library for Health), the Evidence-Linker, Decision Support, EBPracticeNet, Gezondheid & Wetenschap and a couple of other derivatives of these larger innovations. These innovations are tied to each other through an EBP architecture (Figure 1). The starting point of this architecture is the EMDs (electronic medical dossiers) of the GPs. These EMDs have a push and pull mechanism. The pull mechanism pulls information and guidelines from the CDLH. The push mechanism pushes information from the CDLH (of which EBPracticeNet is part) towards the EMD using the information in the EMD to advise the GP about patient specific cases (Decision Support). In practice, this means that physicians can consult medical information (in the form of guidelines or any other academic paper) via their EMDs that are linked through the federal eHealth platform with the CDLH and EBPracticeNet. 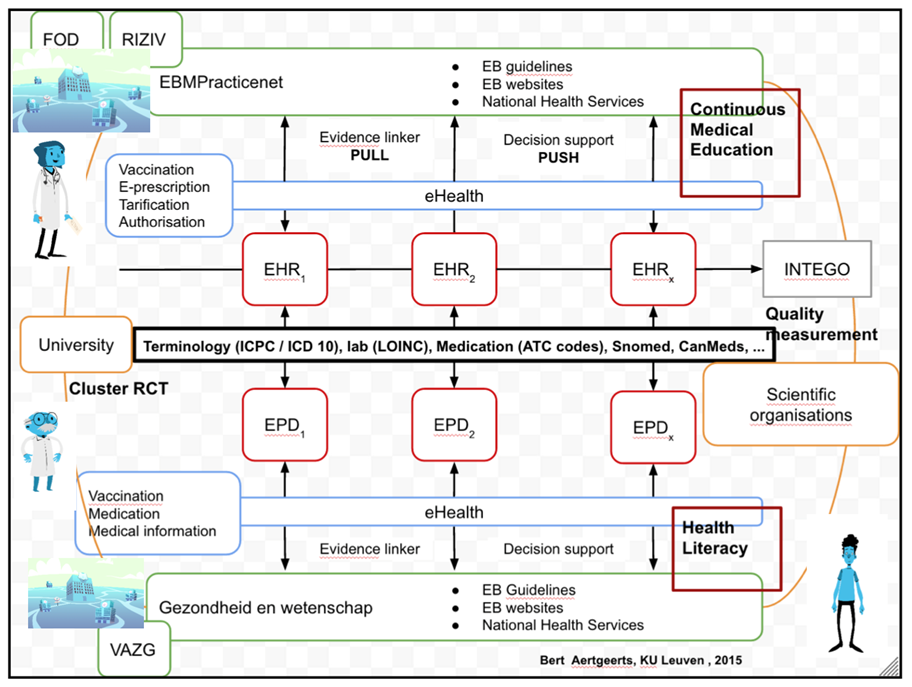 The idea generation process in the EBP landscape was especially oriented towards interaction and collaboration between certain individuals in the network. Because most of the people in the EBP Network are practitioners, they easily connect with each other when trying to cope with problems that relate to their everyday practice. These interactions emerged organically out of this group of practitioners, not through formal meeting arrangements or other structures. Simply stated, the process of idea generation in the network goes as follows: when one practitioner has an idea to solve a certain work-related problem, the practitioner then talks this through with some of his/her colleagues who are also health practitioners. They then seek financial resources to develop and implement this idea. If the idea is considered to be very impactful (meaning it entails a lot of developmental work, creates new structures or has consequences for many network members), this is considered with the entire EBP network, as opposed to only discussing the idea with some individuals.

Realizing ideas is the highest priority for the EBP partners. All of the partners were very committed to realize innovations and they went through great trouble in finding financial resources to realize their ideas. One example of that is the implementation of lay health guidelines for citizens. Because of regional differences, it was not possible to create these guidelines with federal resources. However, with funding from the Flemish government, Cebam/CDLH created Gezondheid & Wetenschap. This is a platform that translates the guidelines into simple information for citizens. Although these innovations were paid from various budgets (Minister of Health, Cebam, RIZIV, CDLH, EBP guidelines and dissemination; Flemish government, Gezondheid & Wetenschap), all of them are incorporated on the same platform. This reveals the nature of the EBP architecture behind the individual innovations (i.e. they are not independent from each other but exist in a larger concept/architecture).

Because the EBP landscape was created by users (especially GPs), the partnership has different levels of user involvement. The highest level of user involvement is the combination of the EBP core partners (Cebam, CDLH, Minerva, WOREL, EBPracticeNet). In all of these organisations, representatives of users (who are in most cases users themselves) are included. Because of the historic importance of the EBP partners in creating innovations and establishing the EBP architecture, this group of users should be regarded as users who lead the creation process of EBP innovations, as opposed to simply advising or being consulted by the government in this process. Users lead the process and seek financial aid from the government.

Because these EBP partners have their own organisations that are oriented towards EBP in Belgium, there is however still a distance between the EBP organisations and the users who work with these innovations in practice. To capture these user-experiences, there is a second layer of user involvement, which entails the professional groups of the ten health care professions (Domus Medica, SSMG, BCFI, APB, …). Representatives of all ten professional groups advise the core partners and the government about the direction the EBP landscape should go. Many of these actors are also the initiators of EBP in Belgium (e.g. Domus Medica and SSMG). They were historically important to realize the EBP architecture that is now used by the core partners and the government. These representatives of the professional groups are also present on a structural basis in the advising board of the EBP Network.

Still, they are only representatives of users, and they cannot capture all of the issues the users have with the EBP innovations. Therefore, a third layer of user involvement was installed. This layer consists of physicians who disseminate the innovations to a broader audience. Besides their function as a physician, they also teach other physicians and undergraduates about the EBP innovations, and can therefore capture the issues people have with some of the innovations. They are informed and consulted by the core partners and are very important to inform and listen to other users and capture their concerns.

A fourth layer of user involvement is ad hoc involvement of some users, for instance to test the EBPracticeNet website, or through workshops that capture the needs of the users regarding new EBP practices.

To be able to understand the innovation process (which has been going on for almost twenty years), we need to look at some of the initial ideas regarding the EBP in Belgium. The ideas (regarding CDLH, Cebam and the Evidence-Linker) were first introduced by some researchers at universities (some ideas were actually part of a master’s thesis). These ideas found an implementation ground when these researchers contacted IVS, the company that provided both ICT expertise and access to scientific content.

From there on, most of the innovations introduced in the EBP landscape were an interplay between academics/practitioners who invented some of the conceptual ideas, and IVS who implemented these ideas using their technical expertise. The government was never an actor that contributed substantively to the ideas. However, the government was the most important actor to provide financial resources to make the EBP innovations happen. Without governmental resources, EBP would never have evolved into what it is today. The recent evolution towards a more controlling government (with the EBP Network) seems to indicate that the government not only wants to financially invest in EBP, but also wants to contribute to the content of the EBP innovations. This shift in roles creates tensions between the EBP partners and the government. The EBP partners do not only see governmental financial aid being questioned, but also experience a decrease in their own autonomy because of the establishment of the federal steering committee where most of the important decisions are made. However, the creation of the EBP Network might have a strong positive impact on the coordination of the EBP landscape, as the EBP Network brings all of the relevant actors together (not only the GPs). Government could use their role as coordinator to diffuse some of the innovations made by the EBP partners to other health professions, who are currently lagging behind in implementing the EBP the GPs already have at their disposal. A shift in focus from invention to diffusion might give the other partners the opportunity to catch up.