This case study describes the set up and collaboration dynamic of the Online Access Act (OAA) (Onlinezugangsgesetz). The OAA was enacted in August 2017 as a result of increasing dissatisfaction among policy makers and administrators with the slow progress of government digitalisation in Germany over the last decade. The act obliges all levels of government to offer their public services online through a single digital gateway by the year 2022. Widely understood as turning point for government digitalisation in Germany, the complexity of the OAA is tremendous and the project has even been described as “the largest collaboration effort of German government over the last 20 years.”

The scope of the OAA is extremely wide, requiring around 5800 different services and all their relevant underlying procedures to be digitalised from within 575 different public service areas. The project encompasses services offered by all levels of government, including 14 federal ministries, 16 state and 11,054 local governments, all of which are granted a strong degree of autonomy under the German federalized system. 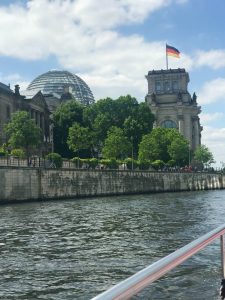 The two most relevant actors in this complex collaboration arrangement are the IT Planning Council (IT Planungsrat; IT-PC), its operative arm known as the Federal IT Collaboration (Föderale IT Kooperation; FITKO), and the Ministry of the Interior, Building, and Community (Bundesministerium des Innern für Bau und Heimat; BMI). The OAA’s comprehensive digitalisation program follows two major lines of action: (1) the joint portal and (2) the digitalisation of services for citizens and enterprises, whereby the latter has attracted much higher attention and resources. The federal government has allocated 500 million EUR for the next four years, and the remaining 75 percent of the costs is to be provided by the states. Overall, the OAA amounts to two billion EUR plus an annual budget of 180 million EUR for the IT-PC. As part of a COVID-19 reform package, the federal government decided to allocate further 3 bn. EUR for the implementation of the OAA in June 2020.

The collaboration has been organised in a unique way for the German government context. The overall task split into 14 “thematic fields” with a joint responsibility to be shared by one federal ministry and at least one federal state that both take the leadership for digitalising all public services within one specific thematic field. For the development of these digital services, a series of “digital labs“ was organised by the BMI. These digital labs followed the principles of user orientation and interdisciplinarity, and brought together experts from administration, designers and users to develop ideas, prototypes and implementation concepts.

The approach of the OAA is highly unique in the German context, as its structure is based on a philosophy of shared responsibility and collaboration. However, this approach had the consequence, especially in the early phases of implementation, that responsibility and ownership was rather unclear. It took some time to develop a shared understanding that the goals of the OAA cannot be achieved without active collaboration through all levels of government, and the OAA will require a transformational shift away from a rather well-established system of negative coordination in Germany.

Complexity unanimously was named as the most relevant challenge for implementing the OAA, both due to the technical complexity of nearly 180,000 implementations which need to be carried out under high time pressure, and the “political complexity” navigating the heterogeneity of existing functionalities among many actors. Interviewees agreed that this complexity would be best managed with a combination of central steering and preparation, but decentralised implementation, and, most importantly, a strategy of prioritisation and consequent distribution of work.

Conflicts of interests between the state and federal levels have frequently occurred, and the principle of unanimity practiced by the IT-PC in conflict situations has reportedly led to “rotten compromises“. It is also a source of debate if the OAA is even legally binding for the local government level, despite a large share of government services being provided at this level. It has taken time to build up the necessary trust among the various actors and states to effectively work together towards a common goal. Though in the early stages actors perceived the role of the BMI as domineering, they have since come to appreciate the support and motivation provided by the BMI.

Challenges and implementation dynamics differed quite substantially between the two main OAA pillars. The digitalisation program with its thematic field structure and digitalisation labs is assessed much more positively than the joint portal. As of early 2020, progress with regard to the joint portal was rather low, but with the SDG enforcement deadline coming up at the end of 2020, interview partners were quite optimistic to find a pragmatic solution to fulfil the requirements in due time.

An assessment of the success and outcomes of the OAA can only be tentative with just having reached halftime of what has been described as a “marathon”. With regard to the kind of innovation to be expected, the interview partners widely agree: the major aim of the law (digitalizing public services, setting up portals and user accounts) is more incremental than disruptive, and due to the extreme broad scope and tight schedule set by the OAA, the scope for real service innovation is also rather limited.

There is very high agreement among observers and interview partners that the most positive outcome of the OAA implementation up till now is a new political relevance of the topic and especially the major improvement in how government is collaborating in its digitalisation efforts. The outcome is however less impressive with regard to visible results for citizens and enterprises. The first three years of implementing the OAA focused mostly on preparatory work and the establishment of new working formats. A full implementation of all public services is likely not realistic by 2022, however, the conditions for a successful digitalisation in Germany are currently better than ever and the measures introduced are certainly going in the right direction.

Our analysis points to the importance of not reducing digitalisation to a technical issue, but to rather understand it as a broader governance and management challenge addressing issues such as civil service/HRM, transparency, steering, collaboration and management capabilities within the public administration system. Our case shows that in a country with a distinctive legalistic Rechtsstaat tradition, digitalisation and intergovernmental collaboration needs clear constitutional and legal foundations to mobilize and legitimize implementation. However, a purely legal approach is not sufficient to ensure successful implementation -- collaboration between federal government, the states and local governments is just as central. Leadership has played an important role in this regard. Individuals were described as pivotal point for collaboration and a shift towards a more collaborative leadership style emphasizing relationships, trust, communication and enabling can be observed. Collaborative leadership styles in German public administration are still more of an exception than a rule, but they are certainly on the rise.