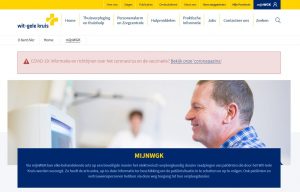 MijnWGK is an online data platform that allows an efficient access of health information of WGK[1] clients for general practitioners (GPs) and the clients themselves. WGK exists of five provincial non-profits which all have access to patient information. However, before MijnWGK, the GPs who treated the WGK patients had no access to this information. This information might be crucial for the GP to take decisions about the medical conditions of the patient. The WGKs invested in a tool which would allow the GPs to have access to the WGK database without the need to buy a new software tool.

MijnWGK is a tool that provides access for GPs to patient information of WGK clients. When users are logged in on their EMD, they can be redirected to the WGK servers using a single sign-on provided by the metahub[2] (eHealth platform). The hyperlink that redirects the users to the WGK servers is built into the EMD software itself to increase the user friendliness of the application. This enhances the communication and interaction between the health care providers and also allows for stronger interprofessional collaboration to emerge. Due to this information exchange, GPs and WGK health professionals are able to align their treatments. Furthermore, online information which was previously inaccessible for GPs can now be consulted. These innovations might have a major effect on the health and well-being of patients. The patients themselves can also access this information which gives them more control over their own health. The collection, communication and storage of patient information changes due to the network approach of MijnWGK. Information is not the exclusive property of the WGKs anymore and is an asset for a broad range of health professionals and stakeholders (not only GPs but also physiotherapists and the patients themselves). This information can also be consulted on mobile devices (using an app) which allows for a more efficient access to this information.

The project started bottom-up with the question of ten physicians in the province of Limburg to use some of the information they had about patients which were also patient of the WGK. The WGK of Limburg experimented with a simple website to see how the interaction between GPs and the WGK could be organized, which information the GPs could share and which information would be relevant to share with the GPs. This project was a learning trajectory for the other WGKs, and the general necessity of inter-professional interaction between GPs and WGKs was apparent for all WGKs. All WGKs saw the need for such a system and decided to work together. This led to the start of the conceptual phase of the project, in which expectations were formulated and the procurement demands were drafted. What was learned from the experiment in Limburg was used to draw up some of the tender specifications. HealthConnect, a private ICT-developer and ICT-consultant, won the tender procedure and started to create a testing version of the tool together with the WGKs and a couple of physicians who were deeply involved in the whole project.

Because data would become accessible to the GPs through the eHealth metahub, the eHealth platform of the federal government quickly became involved in the project. Through single sign-on and connection to the eHealth metahub (eHealth platform), it was possible to give GPs access to the WGK database without having to login again. Furthermore, the WGKs made sure that the single sign-on was user-friendly by incorporating it into the electronic medical dossier (EMD, software package the GPs use to manage the medical dossiers of patients) of the GPs. The first testing of MijnWGK started at the end of 2015, and the front-end testing was conducted in April of 2016. In October 2016, the tool was finalized and released.

As mentioned, the idea generation phase of the innovation process can be identified before the actual start of the process. The pilot project in the province of Limburg created many insights in how to share data with GPs, which resulted in a breeding ground for the MijnWGK project. The initial idea was therefore not produced through interactions between the project partners, but through experiences from the pilot project and the tender criteria formulated by the steering committee and board of directors. There was, however, a lot of idea generation after the contract with HealthConnect was closed, focused on the development and implementation of the innovation. For example, the first conversations between the coordinator and the eHealth platform were about how the therapeutic relations could be incorporated in the connections. These discussions were very technical and aimed at the implementation of MijnWGK, but nevertheless new ideas arose during these discussions (e.g. MijnWGK as an individual data vault or one of the databases of COZO/VZN KUL).

The WGKs were used to seek consensus between them, because they were all autonomous. This was something HealthConnect was not used to, which became visible in the wish of the federated WGK to open up the software for external parties. Some of the WGKs preferred not to do this and shielded their software from external parties. To prevent more of these issues, the coordinator had drafted a contract between the WGKs together with the lawyers from WGK and TimeLex before the project started. The contract already aligned many views and interests of the participating WGKs and reduced the risks, uncertainty and transaction costs in the partnership substantially.

As mentioned, users were already present at the very beginning (before the procurement procedure) of the project. Ten GPs led the pilot project out of which much of the inspiration would come for the MijnWGK project. Moreover, one of the GPs was part of the steering committee of the project, which shows the high involvement of the users in the project. One example of this high involvement was the fact that the GP who was part of the steering committee contributed to the contents and visualization of the interface of the eHealth tool. Initially, the user asked for a link between MijnWGK and the EMD (electronic medical dossier) of the physicians, which could only be realized if the information of the individual WGKs was somehow connected and the physicians were able to access that information without having to use another "WGK tool" (i.e. the user asked a single sign-on which was enabled through collaboration with the eHealth platform, which caused MijnWGK to become part of the eHealth network of Belgium). Whereas the coordinator was especially focussed on integrating the available information between the WGKs and stimulating the collaboration between these WGKs, the user had a crucial role in translating the wishes of the physicians (users) to the partnership (i.e. single sign-on, integration with EMD software, connection to eHealth platform). This shows the fundamental role of the users involved in this project, since they were able to direct the project towards an innovation with broader practical applications.

A couple of things have been crucial for the success of this project. First of all, the position of the federated WGK was essential for the whole process. The federated WGK is an organisation seen as legitimate by the other WGKs to undertake such projects, and therefore supported in its objectives regarding MijnWGK. The federated WGK, therefore, did not need to convince the other partners that they were the best actor to coordinate the project. Second, although the WGKs served the same clients and had the same mission and structure, all of them were autonomous. The contract between the WGKs formalized their relationships between one another in the project and made clear what was expected from them. It also reduced the uncertainty, risk and transaction costs for the WGKs, which enhanced their commitment to invest in the project. Third, bottom-up growth of ideas and being sensitive to those ideas was critical in this partnership. Not only the pilot project is an example of this, but also the deep involvement of one of the physicians (users) in the early stages of the project. Being sensitive to ideas that were created out of the group of users transformed the project. Fourth, open and constructive interactions between the partners (communication, dialogue, collaboration, etc.) were crucial in this project. Through the formal project teams, but also through informal meetings and bilateral discussions, MijnWGK emerged as a successful system.