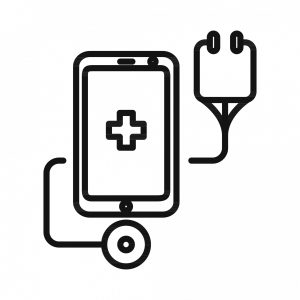 The ‘Mobile health technology for women with osteoporosis’ project started in 2015 and was completed in 2018. The purpose of Mobile health technology for women with osteoporosis (hereafter dubbed the osteoporosis app) was to develop a mobile application that could help patients process their results from bone scans and promote patient self-care and empowerment. Osteoporosis is a chronic condition, where the bone mass/density deteriorates to such a degree that it increases the risk of fractures. It is diagnosed based on a bone scan with which the mineral content and density of the bones are measured.

As women are especially prone to this condition after climacteric, the project focused on developing a health offer to women diagnosed with osteoporosis between 50 and 65 years of age, and which can help them deal with the diagnosis process and time in between scans. There was no similar offer at the time, which was the key motivation for the partnership.

The partnership resulted in a mobile application that can be reached through an existing patient platform used by the university hospital in the Southern Region of Denmark involved in the project, which makes it possible for patients to access information about their health. Specifically, patients that go through a bone scan due to suspicion of osteoporosis are asked if they would like to get the results of the scan through the app. If they accept, the bio analyst that performed the scan enters the result (a t-score). Depending on whether the result indicates osteoporosis and to what degree, the app automatically shows the patient relevant information that pertains to that specific score/severity of the diagnosis.

The idea of creating an app for women with osteoporosis was originally brought into the project by the first involved business, who was in the market for fitness and training apps. They saw the opportunity to create such an app for this particular patient group and reached out to the public partner and the coordinator of the project, who at that time was starting the project. However, the public partner and coordinator insisted on not determining the outcome (i.e. a training and fitness app) from the beginning because the solution had to be user-driven.

The innovation process was in general very much focused on creating ideas through interaction between public partners, private partners and users. This was especially the case in the second phase where all parties participated in workshops. It was to some extent based on input from these workshops, e.g. what type of knowledge and information the patients’ need, as well as separate meetings with the different involved parties (such as bio analysts from the involved university hospital) that the prototype for the app was developed. Throughout the project, there was a strong focus on implementation in that the coordinator herself was motivated by creating a solution that would make a difference in practice; that it had to be put to use. This motivation rubbed off on the other involved parties as well.

The involved users represented both clinical staff (bio analysts and doctors from the Osteoporosis Clinic at the involved hospital), general practitioners and patients/citizens diagnosed with osteoporosis. Moreover, the Association against Osteoporosis was involved in the project as a user representative. The users were overall involved throughout the project (2015-2018) from idea development and selection to testing and implementing the mobile application, although additional users were involved in the implementation and testing phase. For instance, while one bio analyst was involved from the beginning, the rest of the bio analysts at the Osteoporosis Clinic were not involved until the testing and implementation phase.

There are a few key drivers that especially contributed to the success of this project. First, the project coordinator was very adept at facilitating a smooth process and was complimented in all interviews with partners and users for being inclusive but also efficient. It was also a part of her own research, which gave her a clear incentive to create the best possible project.

Second, the user aspect was crucial. The project was very much focused on involving users, as both clinical staff and patients were needed to ensure that the solution would be relevant, useful and thus have a higher likelihood of being implemented. The coordinator emphasized that while she did not know what the final outcome would be when she started the project, her focus and main motivation was that the solution had to make a difference in practice.

Finally, the business that was originally involved in the project formation was replaced and that made a big difference. The first business was considered too profit-oriented rather than collaborative, whereas the second business had experience working with people in the healthcare sector, they were local (which makes it easier to meet in person) and were much more attuned to the needs of the users rather than selling a product.