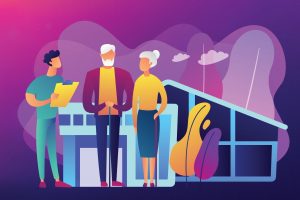 The nursing home Booghuys, part of the city of Leuven, provides care for elderly people. In 2016, it was decided that the nursing home needed some renovations. The involved actors worked out some concepts for the renovations and did several working visits to other nursing homes. However, in June of 2017, the involved actors decided that the renovations would not fulfil the wishes of residents and staff, and they eventually worked out a concept for a new building. This allowed the involved actors to start from a blank sheet, and to construct a building which was tailored to the wishes of residents and staff. Because of the specific needs of some of the residents (people with dementia), technology played a crucial role in the design of the building. Soft- and hardware components were integrated in the building to provide maximal support for both residents and employees. Examples of these technologies are smart cameras that detect when residents fall out of their beds, tracking technologies coupled to access cards that provide residents with ample movement freedom without the necessity of physical intervention, and integrated software that connects the various technologies in one system.

The innovative functionalities of the eHealth technology are focused at enhancing the support for employees of the nursing home in taking care of the residents. The technologies facilitate the work of the employees by providing automatic entrance to specific rooms, making the environment of the residents safer, and gathering data about the individual residents to help take care of them. At the level of the technological components, we can delineate the hardware and software components. The Bluetooth trackers are the first example of some of the hardware components used in the project. They work with both tracking devices in the form of wearables and Bluetooth receivers which are attached to the electric doors or gates. These doors or gates only open when residents with the proper Bluetooth signal come close. This prevents residents who are not allowed to go outside from getting lost (this triggers an alarm which calls for intervention of employees). This increased management of the movements of the residents is possible up to the level of individual rooms (e.g. a confused resident who tries to enter the room of his neighbour instead of his own, will not be provided access to this room). Second, smart cameras are used to detect if a resident has fallen out of his/her bed. If the resident stays too long in a demarcated area around his/her bed, the camera recognizes this as someone who has fallen out of bed and cannot stand up without assistance, which subsequently triggers an alarm that alerts the nursing staff. Because these cameras are present in every room and present some difficulties regarding the privacy of the residents, the partners have implemented a “privacy switch” which turns off the cameras/blurs the images when the resident wants to have some privacy. The cameras also allow for virtual patrols of the nursing staff. Instead of doing their last round to check if every resident is fine, the cameras can also be used to do this virtually, which safes a lot of time and does not interrupt the sleep of the residents. Either way, the technologies provide both residents and employees with a lot more choice and support in their daily activities.

The most important software component the project achieved is the creation of a system which integrates the data from all of the hardware components. This is not only limited to the Bluetooth trackers and smart cameras, but includes the security cameras in the building, the dispatch system, the fire control system, etc. The system can be accessed via an app which is installed on the smartphone of each employee, which enhances the efficiency, effectiveness and amount of interaction between residents and caregivers. Because the system integrates all of this information, data can be used to recognize underlying patterns of behaviour, which might allow the nursing staff to prevent accidents before they occur. The data can also be used to increase the general health and well-being of the residents, because they are monitored all the time. Personalized interventions and caregiving, and the prediction of accidents all become possible due to the large amount of collected data.

Idea generation was present in the project throughout the whole innovation process. Most of the ideas were created in the phases before the procurement process (in which the design office was involved) and during the proof of concept (POC). The proof of concept (POC) was a test environment in a few rooms of an existing nursing home which incorporated all of the used technologies to let the residents and staff experiment with these technologies. The POC was of crucial importance for the choices of technologies and furniture in the new nursing home.

There were also instances in which additional knowledge was needed, for example on the implications of dementia for residential environments. The nursing home Booghuys and Zorg Leuven organized some working visits to other nursing homes to acquire this knowledge. Moreover, people from “Expertise centre for dementia Flanders” were consulted, as were people which had experiences with small-scale normalized living (the core concept of the new nursing home).

The case of the care technology of the nursing home Booghuys is an example of an innovative service which was created out of a partnership with diverse actors. The project can be seen as highly flexible and explorative in nature. The core partners created an environment in which actors could experiment with a test diverse options in an isolated setting. The whole project is laced with instances in which decisions or implementations needed changes, which made them better and more aligned towards the needs of the users. Because of the explorative approach, the project was more complex than similar projects, and this complexity had to be managed. The coordinating actors primarily used two strategies to manage this complexity. First of all, contractual and accountability measures were used to enforce some demands and decisions upon the partners. The contract and accountability mechanisms between the partners formalized the relationships between these partners, which made the relations perfectly clear for every actor (e.g. accountability of actors towards other actors). Second, open discussion and dialogue made it possible to manage these relationships in the face of complex and unforeseeable circumstances. Working with project teams facilitated these interpersonal interactions. Another crucial factor in this project was the openness towards employees and residents and the “testability” of the innovations. Setting up a test environment and a thorough participation process with the users generated not only bases of support amongst this group of stakeholders, but also provided new and useful ideas and experiences. Additionally, the large amount of freedom the coordinators had to learn which practices would work best, had a lot to do with the general support they received from their political leaders. There was not much intervention from political representatives and the partners could conduct their objectives without a lot of political interference.