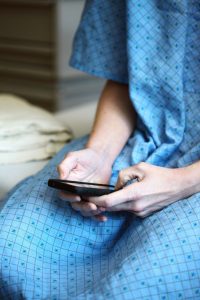 The purpose of the collaboration “Patient Reported Outcome Measures in a mobile application” (henceforth “PROM”) was to improve patient-hospital communication through the development and test of a mobile application that makes it possible for patients to report their progress after surgery from home and for the clinical staff to gain a quick overview of the patients’ condition. The project took place at a university hospital in the Southern Region of Denmark, specifically in four different units of the hospital. It was initiated in Spring/Summer 2016 and was completed in early 2017.

The motivation for initiating this project was to make it possible for patients to avoid spending time on visiting the hospital several times after surgery to answer routine questions from a doctor, especially in cases where they were doing well. It was also motivated by the prospect of providing a better working procedure within and across hospital units, as the clinical staff can gain an overview of patient responses and use the responses to plan their work. Moreover, through this project, the hospital could introduce the same solution through one single business rather than using different solutions in each unit.

The result was a mobile application that was integrated with an existing, digital patient platform for patient journals. Patients can answer surveys about their well-being and side effects through the app 3, 6 and 12 months after surgery, and their answers are then scored into one of three categories through an algorithm: red, yellow and green. Patients that are in the red and yellow categories have follow-up meetings in person or over the phone/video with nurses. Green indicates that the patients are doing fine (or as expected) after surgery and the clinical staff do not have to take further action unless the patients specifically request it.

The innovation generated in this project has successfully transferred patient reported outcome measures from other electronic systems or from paper questionnaires to a mobile application that is integrated with an existing patient platform. However, the app is only fully implemented into clinical practice in one unit at the involved hospital. The app was purchased and made accessible for other hospitals in that particular region through a common electronic platform, but it is not known whether it is used in practice at other hospitals. The research-oriented nurse that was involved in the project noted that one of the reasons why this type of app is not used more generally is that there is not much evidence of the effect on clinical practice (i.e. whether the information is used actively to improve patient care). Based on the generally positive statements about the use of the app and patient satisfaction from some of the respondents, the app has addressed the objectives from the project in improving the communication between patients and the clinical staff, but, so far, only for patients recovering from prostate cancer surgery.

The app means that the patients no longer have to come all the way to the hospital from different parts of the region for every check-up, even if they are doing fine. Moreover, physicians do not have to spend time on these routine check-ups. Instead, the app scores the patients’ answers into red, yellow or green categories that signal to the nurses whether they need to follow up with the patients or not and how (e.g. do they need to schedule a new surgery).

The innovation and collaborative process began with the consultation of the involved staff in the different units of the hospital to identify their needs. This resulted in a back and forth dialogue with the business, the coordinator and the users concerning the business’ proposed solution. The idea generation thus took part through interaction between the involved parties. However, it had been determined by the hospital management from the beginning that an app for electronic distribution and collection of survey answers was to be developed. Hence, the idea development took place with this particular innovative goal in mind and was therefore somewhat restricted. Moreover, the short duration of the project meant that some of the involved users and public partner did not think there was enough time to overcome cultural differences between public and private (e.g. have the business observe their clinical practice) and to test the solution properly before implementation.

The process was generally perceived as open-minded, meaning that the involved users and partners were open to the ideas of others and there was a positive atmosphere in the project team. The public partner experienced that some users were to some degree trying to push their own ideas through. This tension was reduced by refocusing the attention of the users on the common objective of developing a useful app with validated questions that would provide better communication with the patients and a better workflow for the staff. Because of this common objective and the management decision to implement the app, there was a lot of focus on quickly developing an application that was ready for use.

Although the users for the app include patients (it is the patient who answers the questions in the app), this user group was not included in the project. The focus was on involving especially nurses from the four participating units at the hospital. The interviewed users included a research-oriented nurse who was doing a postdoctoral project related to the solution of the partnership, a development-oriented nurse, a head nurse and nurses working in clinical practice. They had the professional knowledge in regard to which questions should be asked to their respective patient groups and they were the ones to follow-up on the answers, implying that it would be their work procedures that would change because of the app.

The project is a case of mixed or limited success which resulted in a limited implementation of the developed app and which generated both positive and negative feedback from the users. As such, there were some diverging opinions about the innovation and collaborative process among the respondents. The coordinator and some of the users generally assessed it as successful and were quite positive. Others expressed frustration in regard to the different perspectives on what the app should have been able to do. Put differently, there was tension between requests for validated, standardized questions and more customized questions developed by each unit. This tension was less a question of the potential in the technology itself.

Moreover, the public partner and some of the users emphasized how the app was a management decision and that they had not been asked whether it was a good idea. The project was perceived by them as motivated by an economic rationale. In relation to this issue, some of the respondents experienced the project as being rushed, and they wished that they could have had more time to develop and test the solution.

These issues demonstrate the importance of including or consulting users in deciding the innovative purpose of the project to ensure support and a smooth collaboration and implementation process. The relative success of the project can to some extent be ascribed to the coordinator and the business. The coordinator was praised for doing a good job, making it easy and manageable for everyone to participate, and the business for their communication with the involved users, prioritizing their needs as well as the patients’.