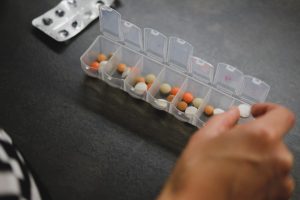 The SAMPA project[1] has been implemented at the outpatient pharmacy unit at the University Hospital Miguel Servet (HUMS) in order to improve adherence to treatment, efficiency in drug management, accessibility to the Outpatient Dispensing Unit and patient care, as well as reducing the error rate in the processes of medical prescription, pharmaceutical validation, dispensing and administration of medicines to outpatients. Most of these objectives could not have been achieved without the development of new technology to automate drug storage and dispensing and the digitalization of all processes, from prescriptions to checking adherence within the project of reforming the HUMS outpatient pharmacy unit. The project started in December 2016 and ends in December 2021.

Different innovations have been implemented: an electronic prescription platform (integrated with the health systems in use at the HUMS), a patient appointment system, a robot for automatic storage and dispensing in assisted and unassisted mode, a full traceability system for the entire drug management process, primary and secondary adherence records system, improvements to the website, an application (app) and a contact and information system in the dispensing area to facilitate communication with patients.

Physicians can prescribe medicines to their patients with an electronic assisted prescription system. This system provides recommendations, alerts about interactions between medicines and maximum doses, and information about the adherence of the patient to the treatment to support the physicians’ decisions. The pharmacist has the possibility of calling patients for consultations on particular subjects (e.g. to explain the use of medicines) and they can request a consultation by a pharmacy technician. Medicines (codified with a QR code) are delivered by a storage and dispensing robot that has reduced errors and the space and stock needed. The patient is called and receives the medicines much faster with the automatic dispensing system. This system allows complete traceability of the medicine, making this service safer for patients. The adherence of the patient to the treatment is controlled with an app that directly calculates adherence through dispensation and adherence surveys.

The partners tried to solve complexities by exploring the views of other partners and by connecting resources between partners. When complexities arose, the coordinators arranged the necessary meetings for all partners to present their views, and, with successive interactions, agreements were reached. The partners made some preparations for the meetings (e.g. pre-meeting reports, meeting agendas, presentations and reports to be delivered at the meetings). The general preparations were made by the coordinators and the relevant partners contributed with content.

The partners searched for similarities when there were different ideas. These differences arose in defining the desired capacity of the final service (e.g. number of patients, number of care posts according to the activity at the hospital, the expected growth in the number of patients) and some of the characteristics of the innovation (e.g. design of prescription management, dispensing and appointment modules). The partners focused on feasible ideas and the terms of the contract.

Users provided knowledge for the design and development of the innovation and feedback about user experience. Users’ contributions were recorded in reports and noted in the proceedings, and applied when feasible. The interviewees gave different opinions about the rigidity of the user participation process and some preferred more rigidity in the participation of pharmacists. However, all the interviewees noted that user participation has been a success and has fulfilled their expectations.

The collaboration and innovation processes between partners have been smooth and there have not been any major conflicts or difficulties. The contract clearly established the purpose and participation of each partner, preventing strategic behaviour. There were some differences in the scope of some parts of the innovation, but the private partners were able to reach an agreement with the mediation of the coordinators and the increased interaction between partners in different meetings. The innovation process was also structured in the contract, which has helped to avoid the emergence of non-feasible ideas. The partners agree that the design of the contract was one of the success factors in this partnership. It was one of the first PPI contracts carried out by the HUMS, so there was no previous experience with them. The inclusion of other partners (even with a marginal participation in the project) with the legal knowledge for the design of the contract has been helpful to achieve a smooth collaboration process.

The participation of users has been a success because of their motivation to develop the innovation and the communication with the coordinator. The developed tools have changed the healthcare staff’s daily work, solving some of the problems they face, and have improved the quality of services provided to outpatients. However, the early inclusion of patients (within the possibilities of their knowledge) in the design phase could have been useful to increase the performance of the innovation.

The most important lesson learned concerns the advantages and disadvantages of preparing a good contract to establish the relations between partners to implement an innovation project. If the contract is well designed, it allows the final result to be on time and with less conflicts. However, it could limit partners’ willingness to contribute with new ideas to improve the solutions and make them more risk averse. In this project, this type of contractual relationship worked well because most of the innovations developed were not disruptive, but were based on previous technologies that have now been improved and integrated to achieve something new.

[1] “Service for registration and promotion of medication adherence  in elderly patients and destined for the outpatient pharmacy unit at the University Hospital Miguel Servet” http://sectorzaragozados.salud.aragon.es/pags/668fa_cpi