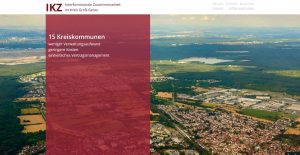 Description of the collaboration

Against the backdrop of burgeoning public deficits and pressing infrastructure challenges typical of a rapidly growing population, in 2013, the district of Groß-Gerau in the German federal state of Hesse, adopted inter-municipal collaboration (IMC) as a key approach for sustainability and prosperity of its 14 member cities and municipalities. Since then, it has successively expanded its collaboration portfolio. This process has also put forth an award-winning joint procurement centre that has centralised procurement for 10 of the 14 cities and municipalities which was officially launched in 2017. The Centre was established under the premise of achieving “less administrative burden, lower costs, more legal certainty”. All cities and municipalities joined voluntarily with the prospect of benefitting from pooling knowledge and resources.

Impact of ICT on collaboration

ICT solutions were identified as crucial tools in order to alleviate the complexity of the shared workflows at the joint procurement centre. In addition to cloud use for data storage, a centrally managed website made information accessible within the numerous projects and working groups. Providing information once, through digital means, was also seen as a necessary step to meet the increasing number of external requests from a broad spectrum of stakeholders for detailed project information.

A digital procurement platform was introduced in 2018 as part of the legally required electronic procurement procedure financed completely by the district administration, which saved costs by not having to introduce individual e-procurement platforms in each of the 10 municipalities. It also made the process more efficient given that with “1,200 employees, 16 departments, 45 schools and two municipal owned businesses, paper-based procurement processes usually reach their limits."

Interviewees emphasised the indispensability of the digital applications currently in use, especially in terms of saving time and materials. They also underscored, however, the importance of "integrating ICT as a companion" to face-to-face contacts to build trusting relationships, understand staff attitudes, and convey positions in negotiations.

Impact of collaboration on efficiency

The joint procurement centre’s goals were to manage the procurement procedure for all partnering municipalities and the district in a legally compliant and economic manner, and to offer a central and competent contact to handle all questions related to tendering.

Although the district’s efforts to achieve these goals has paid off in the long run, interviewees cited unexpectedly high costs incurred in initiating the IMC. These included the overhead costs related to convincing partners to join as not all municipalities in the district were convinced of the benefits at the outset. According to one interviewee: “If the advantages are visible at first sight, there is automatically a high level of interest and willingness to participate.”

The creation of a central steering unit consisting of key individuals deeply rooted in the municipalities contributed significantly to a more systematic and efficient approach to mobilising collective action towards desired outcomes. Substantial start-up funding by the state government, which was granted due to the centre’s fulfilment of all funding requirements and its model character as an exemplary inter-municipal service provider, facilitated the process.

As a result, the initial set-up costs of the centre were partially recouped in the second reporting year and efficiency gains were recorded in many respects. The first refers to cost savings in the municipalities through joint procurements procedures instead of umpteen individual procedures in the individual municipalities. Second, savings were achieved through more favourable prices due to economies of scale. Third, the utilisation of existing employee knowledge meant that employees could process more procedures at once. Fourth, moving the process in-house saved money on external service and consultancy contracts (e.g. consultants, law firms, architecture and engineering offices). Fifth, there is now a continuous guarantee of all services under public procurement law independent of individual municipal personnel capacities. As one interviewee noted, while the success of the first four points mentioned can be easily quantified, the aspect of increased legal certainty provided through the professionalisation of service is a non-monetary factor, the improvement of which is primarily expressed in the prevention of potential errors in the context of complex public procurement law.

Overall, by 2020 – the third year since its launch – all participating municipalities had generated total savings of well over 600,000 EUR, far outweighing the annual investment of 100,000 EUR.

Impact of collaboration on red tape

In light of the strongly legalistic, federalist German state, frequently characterised by a tradition of “negative coordination”, the “joint-decision trap”, and a strong commitment to departmental autonomy, Groß-Gerau’s IMC is rooted in a general administrative setting known for a high degree of red tape and its associated lack of efficiency. Given this, the centralised control unit had a significant effect on reducing several dimensions of administrative red tape by using a consistent overarching approach to cut down redundant processes previously undertaken by individual municipalities. In addition, in keeping with the existing legislative framework, the digitalisation of processes has contributed to lessening the administrative burden for the Centre’s employees Prior to its’ launch, there was no transparent overview of the different orders - including purchase price, processor and buyer - which led to repetitive checks and procedures.

The case of Groß-Gerau has shown that IMC should not be seen primarily as a panacea for budget consolidation, but as a strategy for sustaining municipal infrastructure and services in general. Considering the complexity of bringing about inter-municipal collaboration, it requires the will and a target-oriented strategy with centrally coordinated specialised activities and projects. These include a holistic approach to favour new, efficient and legally compliant collaborations. With this in mind, ICT can assist in transcending organisational boundaries and accelerating interactive processes. While the need to carefully assess the benefits of a potential collaboration remains, based on this case study, public procurement proves very well suited for this purpose.

You can read the full case study here.

To read more about this research, see D9.1 – A Review of Efficiency and Red Tape in Public Sector Collaborations report.